Dr. Parissa Tadrissi currently holds the rank of Professor in the Department of Modern Languages and Literatures at Sonoma State University, having come from the College of Charleston in 2010. She earned a Master's Degree in Spanish (2002) and a Ph.D. in Hispanic Languages and Literatures from UC Santa Barbara (2006). Dr. Tadrissi is the Director of the Master's program in Spanish and a member of the senior faculty in the Spanish program.

Dr. Tadrissi’s areas of research include contemporary Spanish literature and culture, gender studies and the use of technologies of information and communication in Spanish cultural studies—particularly in literary and youth cultural movements. These research interests often translate into teaching students about analyzing literature, histories and cultures in the context of global realities  that unite and sometimes divide peoples. For example, Professor Tadrissi may discuss in various gradations the complex relationships between Hispanic countries today, the role of youth and cultural movements around the world, and fundamentalism in the Hispanic world as compared to the U.S. (ex. MeToo/Comisión 8M, Occupy Wall Street/Los indignados; the historic oppression of religious, ethnic and linguistic minorities in Spain and Latin America in relation to western hegemony).

Dr. Tadrissi’s research on information and communication technology in Spanish literary and cultural studies currently focuses on the taxonomy of virtual literature and how it relates to readers, their agency and the manipulation of "text". Her record of scholarly contributions includes a variety of articles in peer-reviewed journals and anthologies, most recently:  "Rethinking STEM through Digital Spanish Literature: Women, Rupture, and Community in the Works of Remedios Zafra and Belén Gache,” in A Laboratory of Her Own: Women and Science in Spanish Culture published by Vanderbilt University Press. In addition to academic publications, Dr. Tadrissi has presented at dozens of scholarly conferences throughout the U.S. and around the world, most recently she discussed "Finding New Frontiers: The Creative and the Aesthetic in Digital Latin American Literature" at the Southwest Council on Latin American Studies Conference (SCOLAS), in San Miguel de Allende, MX. She has participated on scholarly panels, delivered workshops and guest lectures, and served as an academic consultant regarding Hispanic youth in the United States.

School of Extended and International Education 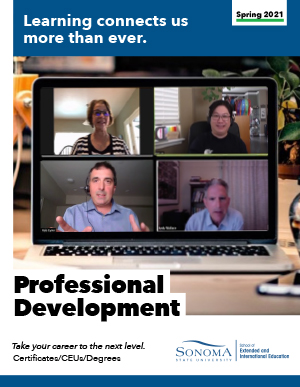