Stephane is a certified Master Black Belt in Lean Six Sigma and has over 20 years of experience in process improvement and change management, both in the US and in Europe. Stephane began his career at Pfizer in Paris, France, where he was in charge of streamlining processes in both the Sales and IT departments. He continued his experience working for Deloitte in San Francisco, CA on different improvements projects focusing on Service Quality. Then Stephane worked for Airbus in Toulouse, France. In that role, he managed a major project aimed at streamlining Airbus’ manufacturing assembly lines located in France, Spain, England, Germany, and China. Back in the US, Stephane joined UC Berkeley Shared Services as a Process Transformation and Innovation Manager.

Stephane led different projects focused on process improvements and System implementations. In Addition Stephane also developed and taught the Lean Six Sigma training program at UC Berkeley. Stephane then expanded his role with by Bio-Rad to lead the Global Operational Excellence program. The journey started in Global Manufacturing and is then expanded to the entire organization. Today, Stephane leads the Business Process Management department at Kaiser Permanente. In Addition, Stephane is also the President & Co-Founder of Lean & Sustain LLC https://leansustain.com/ focusing on Helping Organizations in their Lean Journey and Sustainability through Effective Change Management.

School of Extended and International Education 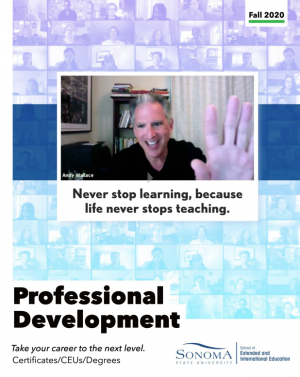